I have a quite hansom and lovable scamp of a pup called cooper (coop). He is a good puppy. azzagoodboy!

Last night I finally characterized the game that we play with one another. It is called "guess when I have to pee." He is the charming host, I am the hapless victim. Unlike most dogs, Cooper gives no indication that he wants to go out or needs to excrete(#1 or #2). So, the best we can do as doggy-masters is just let him out every once and while and hope that he does his dirty business on accident while he is out playing. It is a real gamble. He would rather do almost anything rather than use the lawn-toilet. He must hate peeing, maybe he has canine gonnarhea and it burns. When I take him out to go the bathroom, he will try to play with me by bringing various toys in the backyard until he realizes that I mean business. I usually try to speed up the process by immediatly pointing out to the yard and saying "go potty" at least 5 times in a row, like he knows what the hell that means. It is pretty funny, b/c he usually just looks at me in bewilderment (see 2nd pic below) during this period, then he sulks out and trys to give it a squirt or two. so, the result is that I have to force him to obey his natural need to dispose of waste.


Coop smugly smiling as I get frustrated over his inability to communicate his potty needs. 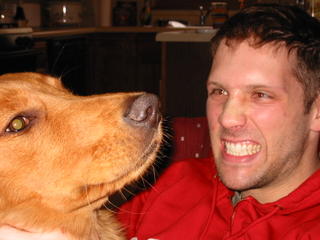 sometimes when I have randomly determined that now is a good time for cooper to potty, and i tell him to go outside, he runs away from me and goes to other rooms in the house.

we have an interesting dynamic, coop and me.

So now you see how complicated this makes my lifestyle. Not only do I have to randomly coax him to leave the house to go out to use the bathroom, but I have to go with him to coach him along. This is especially aggravating in the winter when I am in my PJs. Sometimes I just open the door and push him out, but this means I have to do a peeping-tom routine and watch him through the window to make sure he completes the transaction. If he doesn't I have to put on shoes and a jacket and go out and hold his little hand while he goes. This is what dog ownership is about people. Watching and enforcing bowel movements.

I have considered going out there and trying to squeeze him real hard, to try to force it out mustard-packet style, but that hardly seems humane.

Me and my wife talk about the frequency of his business. If he does a #2, when I come in from the backyard I announce it to her the same way I would tell her the steaks are done. I can't put my finger on it, but this is wrong for some reason. Why the hell am I so excited about my dog's truimph over his bodily processes?
I have considered making a system where we keep track of his bowel and bladder content by some sort of posted visual aid, but I thought that would mean that I have crossed the line in to some sort of fascination or obsession with the goings-on of my dog's excretory habits.

This dog may look content, but secretly he is has a level-10 peeing emergency 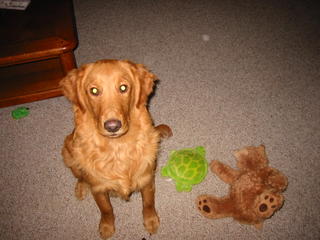 On a different note, my wife thinks it is imperative to brush the dogs teeth. She has bought dog's toothpaste, and get this: doggy mouthwash. no joke. It is a good thing she does this too, because I sure as hell don't want his teeth dirty next time he bites into his own feces. Speaking of that, are dogs the only species that eat their own poo? To me, that sounds like a efficient way to live. For some reason I know that human poop has a lot of undigested protein in it. If that is the case for dogs, and they can eat their own poop without vomiting, why not give it another go to make sure you didn't miss something? It is like running the dishwasher twice. Okay, this blog has taken a nasty turn.

coop as a very small puppy happily dreaming of chasing cars and barking at strangers. Shortly after this picture is taken he pisses his pants because he didn't know he had to pee. 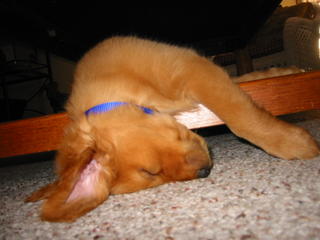 Comments:
Maybe if Cooper had a doggie diaper it would be good practice for changing the baby's diaper. Plus you'd be so used to changing big coop poos that changing tiny baby poos would be a breeze (stinky breeze).

I like cooper, and he likes me. He shows this to everyone by peeing as soon as I come over. I love it!

I go from port to port to dance and play my recorder for the sailors and merchants. I love to dance! I spin, wink, hop, twiddle, run fast and then come to a very abrupt stop, shake each one of my legs, and then start again, skip, pinch, yodel, scream, head-nod, and stand on one leg! I love dancing!