cereal is hardly ever this fun

I don’t know how familiar some of you are with any Richard Prior movies, but the common theme that I can remember is that Richard Prior was always acting scared all the time. Usually something bad would go down, and he would get scared, and it was funny to see him run around and go apeshit.

I was reminded of him over last weekend when I was at the supermarket. I just so happened to have my camera when I came across a startling and humorous situation in the grocery. This was refreshing, you see, as humor is forbidden in the grocery.

I was in the cereal aisle and I saw a box of trix with the trix rabbit casting his loving gaze on the trix that are always just out of reach. 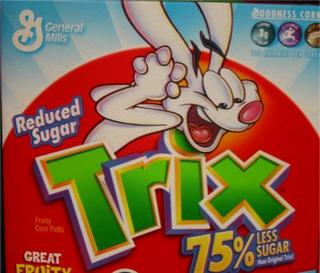 “Typical Trix rabbit ”, I thought to myself. I then proceeded on to the next box in search of my “Crispy Rice” cereal.

I then looked at the adjacent box of Trix and I saw the Trix rabbit in the throws of hysteria:

Comments:
you are warped

I think he looks excited to see something...Like a kitty like Blaise or Franks...and they make his heart smile so much that he gets really excited like that. That's what I think.

why would that make him scream in terror?

I think he came home to the Trix Mansion after another unsuccessful day of stealing cereal from youths and walked in on long time friend Boo Berry given it to Count Chocola in his most Chocolaty region.

I think it has finally sank in that trix are for kids. Fuckin kids.

Melissa, if you were a guy I would call you gay.

bleach, please, you said yourself that blaise makes your heart smile.

Thank you for sticking up for me, Honey. I didn't see him with a look of terror. It was a look of excitement if you re-read my comment :)

I think that the Trix bunny is a homosexual. He was so excited about finally hooking up with Captain Crunch.

Then the Captain pulled down his pantaloons......the rabbit was absolutely floored that he didn't have any Crunchberries.

I go from port to port to dance and play my recorder for the sailors and merchants. I love to dance! I spin, wink, hop, twiddle, run fast and then come to a very abrupt stop, shake each one of my legs, and then start again, skip, pinch, yodel, scream, head-nod, and stand on one leg! I love dancing!